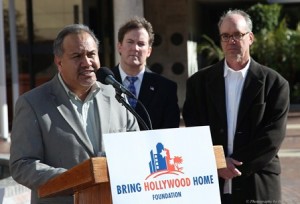 Sharon Hardee Jimenez, Executive Director/Founder of the organization was joined at the news conference by board members, Polo Munoz, and Stephen Seidel, advisory board members Sequoia Sierra and Tracy Saunders, and TV producer Gary Markowitz.

Last year the local SAG/AFTRA offices laid off many staff members after the merger of the two talent unions.  The average actor makes about five thousand dollars a year and is lucky to make minimum wage working as performers.

The Board of the Bring Hollywood Home Foundation is on board with Kevin James for Mayor of Los Angeles 2013.  www.bringhollywoodhome.org

Here are some remarks made by Sharon Hardee Jimenez about the decision to support the candidacy of Kevin James:

“Bring Hollywood Home is the only grassroots leadership in California fighting to expose runaway production as a ‘thief’ stealing away the future of our children and the hopes and dreams of our creative artists who want to work in film, television, commercial and music production.  As a 501 C 4 we can lobby for independent producers who have no real voice in the elected leadership of this state. 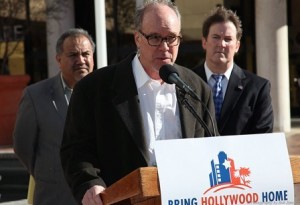 Kevin James name quickly caught our attention when he began to talk publicly about his desire to ‘bring Hollywood home.’   An actress called me who had heard Kevin speak saying, “he sounds like he’s the right candidate for us if we want to work in our home state.”   I was urged to take a closer look and what I read and heard about Kevin James leadership on this issue was impressive.  As a publicist and political strategist working to bring neighborhood councils to the City of LA and independent redistricting to the State of California I’ve been in the middle of many battles, but, nothing as discouraging as what has seemed to be a lack of resolve in the leadership to fight back against the outsourcing of our jobs.

In 1940 my grandmother Enid Lyle Broward Hardee was elected to statewide office as democratic committee woman in Florida.  She was pelted with rotten eggs and tomatoes for daring to suggest women should have equal rights.   What her legacy has taught me is that fighting for what is right requires the courage to face criticism and ridicule and to speak truth to power. 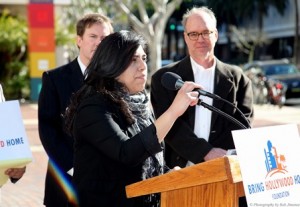 Kevin James has demonstrated the courage to take on special interests by agreeing to publicly debate runaway production when the other candidates declined Bring Hollywood Home’s invitation to finally open up the controversial topic in this race for Mayor.   While other candidates haven’t prioritized this issue at the top of the list of problems LA must overcome – Kevin James met with our leadership and listened to Martin Guigui, a director and board member explaining how he made his movie “The Bronx Bull” in LA by negotiating with the Teamsters, the studios, and the other unions to give his independent production the business model needed to keep the production here when the movie could have been shot in New York or other states with more competitive tax incentives.  Our board is on board with Kevin James”