Trending
You are at:Home»Movies»Hollywood meets China in the images and story of action adventure epic movie “The Great Wall”
By admin on December 10, 2016 Movies

By/Por Ray Falcon, Special for LWR
Production company Legendary’s new film “The Great Wall” will have its unveiling in China next week — and by most accounts, we may just be able to see the grosses from space. Anticipation is at a peak for the film directed by Oscar-nominee Zhang Yimou and starring Oscar-winner Matt Damon. It also marks the kick-off in earnest of Thomas Tull’s Legendary East and comes after China giant Wanda acquired Legendary in January this year. The action fantasy, which Universal is distributing in the rest of the world, has piqued curiosity in Hollywood as a potential model for cross-cultural collaboration directed at the global box office market with a big focus on the Middle Kingdom. 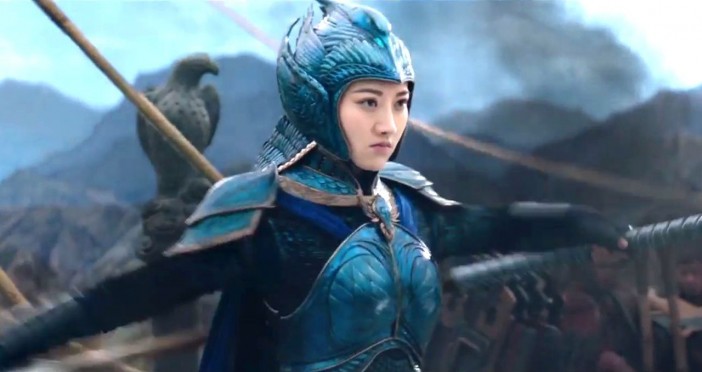 “This is definitely an important film,” says a studio executive. “I don’t know if it’s pivotal, but it’s going to be a trend continually.”
The film has its skeptics who see an expensive gamble to mix East and West and mine global dollars, but after Legendary’s summer success with “Warcraft”, folks are paying attention.
“Warcraft”, while not a co-production like “The Great Wall” — a key difference — was seen as something of a game-changer; a sign that reliable China revenue will help studios cover downside risk for pricey global-minded tentpoles that can lead to painful red ink and write downs when they flop.

That film clicked as Legendary tapped into a perfect storm of strategic partners working with a piece of culturally resonant IP and a key “Middle Kingdom” release date. It is the No. 3 film of the year in China with $221M at the box office. In international markets outside China, where Universal handled, the poorly-reviewed movie nevertheless grossed $165M. In North America, it tallied up just $47M. But with those outsize China grosses, it made folks take notice.
A rival studio exec says, “I think people are watching to see what happens” with “The Great Wall”. “There is certainly industry anticipation and curiosity for it as it’s the first Chinese co-production with a genuine Hollywood global star.”
The co-production aspect also means the revenue share is higher with about 40% of the box office flowing back to the partners.
But “Warcraft” was also a different beast creatively to “The Great Wall” which boasts a world-famous auteur and an A-list Hollywood star. The IP here too has greater awareness. While there are millions of gamers in the world, and particularly in China, the actual Great Wall is one of Earth’s most iconic structures.
The story centers on the building and defense of the titular landmark and incorporates the ancient legend of the Taotie monsters as an elite force makes a last stand for humanity. Damon plays a mercenary who gets stuck on the wrong side of the Wall and assists the Chinese in battle.

It’s billed as the largest film ever shot entirely in China. So, how big a gamble is it? The budget — reportedly $150M — is sizable, though not unheard of for an epic picture with special effects. Add in P&A and it’s costly, but not make-or-break, I’m told. Legendary financed with Universal, China Film Group and Le Vision Pictures. Distribution partners in the PROC are CFG, Le Vision, Wanda and Legendary East.
Success on “The Great Wall” in China seems almost assured — industry sources polled refrain it will be “huge.” Estimates have the film reaching over $200M which would make it only the 4th movie to do so this year — and the second for Legendary. It helps that Great Wall has a lot of Chinese power behind it. Legendary’s ability to harness partnerships was seen as a strategic win on Warcraft.

Even if it misses, “No one is going to stop doing it. It’s 1.4 billion people. If you have one ding, no one’s going to say ‘F*** it, we’re not going to do that again’,” suggests an exec. “There’s too many studios hovering for it to be this one is the one that counts. This is a process that will keep unfolding because you can’t ignore this country.”
But a non-believer cautions if the film fails internationally, “that will probably prohibit others from thinking it’s a smart way to go.”
China’s box office has grown this year, but that growth has been stunted amid crackdowns on ticket manipulation, a drop-off in subsidies and an increasingly discerning audience. A question remains whether a franchise can be solely built off of China and while “The Great Wall” clearly has the Middle Kingdom in its crosshairs, the international ante is upped by the high-profile of the team involved. Despite the downturn, studios have China on the brain. When “Warcraft” did its bang-up business there, one exec told me, “You don’t make a movie when you think it’s not going to work in China.”

Outside China, the release pattern is staggered with Malaysia, Hong Kong and Taiwan going later in December to grow Asia. France, Germany, Russia and Korea go in January. The film will be released in North America on February 17, giving it plenty of time to build overseas momentum and as “Rogue One’s….” business will have presumably trailed off.
It’s early days to be making a call on the ex-China performance, but can this eastern-facing story resonate outside the Middle Kingdom? Says an exec, “It’s really impossible to try to satisfy everybody all the time. Five or six of the biggest movies there have never worked anywhere else, but you can apply that rule to the French, German and Italian cinema — apart from the odd “Il Postino” or “Intouchables” that come along every decade and cross over into some weird zone where people just suddenly tuck into it for whatever emotion it triggers.”
In China, Wanda is key with the Legendary parent also the largest owner of Chinese movie screens at about 18% of the roughly 40,000. “Warcraft” had an unprecedented wide release on 67.5% of screens last June. We don’t yet have the figures for “The Great Wall’s” rollout next week, but can expect it to dominate play.

Legendary has made a big marketing push. Promotional efforts in China have included the November 15 Five Armies Press Conference and a three-day junket this week, unveiling footage for local and international press with the cast in attendance in Beijing. Well-known local talent has also been employed to provide theme and marketing songs; two of which have been chart-toppers already.
Perception is also a factor, Wanda Chairman Wang Jianlin recently gave a speech in Hollywood saying, “Hollywood needs to strengthen collaboration with Chinese companies” who understand the market. He added, “There needs to be more Chinese elements in films… If you want to profit from this market, you will have to understand the Chinese audience. You have to please them, and win their hearts. The best way to achieve this is to add more Chinese elements into U.S. films and blockbusters to make the stories more relevant to a Chinese audience. It should not just be about making profit while disregarding the Chinese audience and their taste.”
The movie spent years in development, at one point Ed Zwick was helming and Henry Cavill and Benjamin Walker were attached to star. In the final equation, Legendary came up with a different formula. Damon is a much bigger international name and has a strong track record in China. “Jason Bourne” movie this year grossed $67M there and $415M global while 2015’s “The Martian” was a $95M winner in the PROC and landed $630M worldwide.
Zhang’s credits include such visually breathtaking pics as “Hero”, “House Of Flying Daggers” and “Raise The Red Lantern”, plus those Beijing Opening and Closing ceremonies at the 2008 Summer Olympics which wowed worldwide audiences.
At Comic-Con in July, Damon said “It was cool to incorporate Chinese mythology in a Hollywood sword and sandal epic.” Yimou added, “This movie is made for the world audience. We have people working all over the world and we worked hard to present this movie to you guys.”
The international cast includes Pedro Pascal, Tian Jing, Andy Lau, Willem Dafoe, Eddie Peng, Zhang Hanyu, Lu Han, Lin Gengxin, Zheng Kai, Chen Xuedong, Huang Xuan and Wang Junkai. Having Lu Han here is a coup; he’s the singer/actor/influencer who was the official ambassador for “Star Wars: The Force Awakens” in China last year.
One international player says, “There’s going to be a world where this formula exists for trying to blend two cultures to create this sort of pudding of success in two of the biggest markets in the world.” How a commonality is defined is key to turning audiences on, however. “They come around every couple of years, in the kind of way that big blockbusters do, sometimes unintentionally. You never knew Avatar or Titanic were going to be that big and other titles that appeal to the human being wherever he lives.”
Another person close to the film says, “Is it a paradigm changer? Maybe.” The market is ripe for the film with growth “justifying things which wouldn’t have been justifiable five years ago,” I’m told.
While “Rogue One…” is making headlines in the rest of the world next week, we’ll keep a keen eye on “The Great Wall” in China.